It’s Not Rocket Science: The Science Behind Customer Decision Making 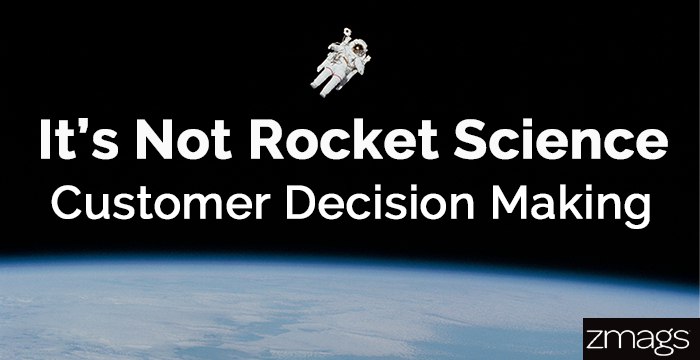 Sharing perspectives on the latest trends and tips to help eCommerce brands stay ahead to engage and drive revenue.

Sure, exploding volcanos and science experiments may seem daunting, but the science behind customer decision-making doesn’t have to be. In fact, knowing the science of shopping can increase your views, customers, and sales. For example, picture two types of shoppers. The first comes home with several bags after a long day of shopping sales, while the other thinks this mass shopping spree is nonsensical and absurd. Turns out there is scientific reasoning behind this. It’s called the dual process theory.

What is Dual Process Theory?

Dual process theory is the idea that two different systems work together during the decision-making process. These are called system one and system two. System one is the automatic subconscious mind which is fast, primal, illogical, and requires very little access. System two is defined as your controlled and conscious mind which is effort-intensive, small capacity, logical, and slow processing.

This customer decision-making theory dates back to the 1800s. American philosopher and psychologist  William James paved the way for more modern interpretations. Is this sounding familiar? You may have read Thinking, Fast and Slow by Daniel Kahneman, who popularized the theory in 2003.

I’m getting there! The point is that as humans, we like to think we are very rational when it comes to decision making. But, in fact, we are not. It’s actually very rare we use our heads when shopping. As customers, we try to rationalize our decision making of system one. And when we need it the most, system two is rarely there to stop us from our shopping spree.

Think of the systems of the dual-process theory as a system of checks and balances. System two is supposed to subdue our system ones. So, when you see an Instagram ad for a cute dress, your logical system two is supposed to stop you from buying the extraneous dress. However, most of the time, that’s not the case. Instead, system one convinces you by saying that “it was on sale” or “that dress quality is too good” or “That was such a steal.”   Now for those who are reading this and saying, “well I have self-control and I only buy necessities when I NEED to,” good for you.

Appealing to System One

Since system two is the conscious mind, you want to keep it focused and present. For example:

Just remember that every purchase is unique. No one is a logical, conscious buyer all of the time. And no one makes all of their purchase decisions with one system exclusively. The two systems work together depending on the context and number of previous decisions made that day.